After four and a half years of planning, Toronto will get the world-class garden it deserves.

Finally, the City has approved our expansion. Council voted on April 25, 2018 to approve its staff recommendation that Toronto “implement the draft Edwards Gardens and Toronto Botanical Garden Master Plan and Management Plan”—a 160-page document filled with the exciting possibilities that the City and the TBG are agreed on pursuing.

We are committed to growing from four to 35 acres and creating a “globally acclaimed botanical garden”. The City and the TBG will be partners in creating this world-class institution, with the City retaining ownership of the lands and facilities while the TBG manages the botanical garden under a licence arrangement.

This is a successful model that is common to many botanical gardens in the United States. Atlanta Botanical Garden, for example, has autonomy to develop and operate to high standards of excellence on city property. The City of Toronto will accord the TBG similar autonomy within our partnership which allows us to aim high and achieve great things.

The TBG will raise funds for its expansion, but the City is also committing $4.85 million for capital improvements. Along with managing the garden (and its programs, activities, events), the TBG also will be responsible for detailed design of the garden and facility improvement as well as having authority over project and construction management. The City will be at the table as our partner, but the leadership in these areas will come from the TBG. The April 25 vote was the culmination of four and a half years of planning and advocacy for the idea that Toronto deserves a world-class botanical garden. Our Councillor, Jaye Robinson, was a strong supporter behind the scenes and at Council (thank you, Jaye!). We also couldn’t have achieved such a great outcome without the support of our members and stakeholders. Thank you.

The TBG’s Board and staff have been patient and supportive beyond what I had any right to expect. As Daniel Burnham, the American architect, famously said, “Make no little plans; they have no magic to stir men’s blood”, but rather, “Make big plans; aim high in hope and work”. I hope you’ve been stirred, friends. Now that we got what we asked for, we get to go out and make it happen! 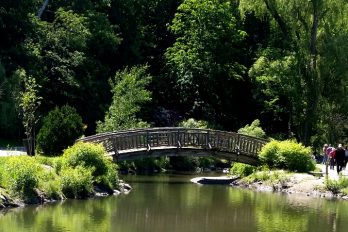 TBG Moving Ahead with its Exciting Expansion Plans