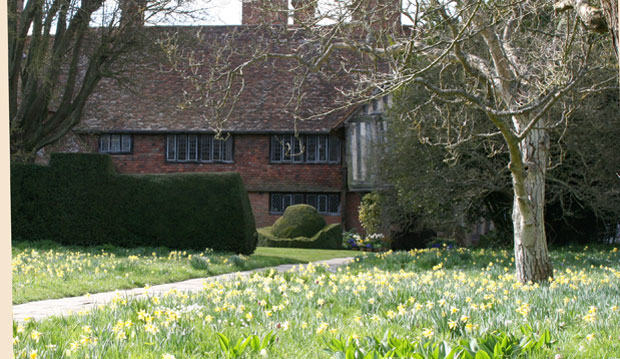 Anyone who admires the ever-changing year-round beauty of an English country garden would do well to visit Great Dixter in East Sussex in southern England. It’s a mediaeval manor house surrounded by orchards, wildflower meadows, yew hedges, formal topiary and its most famous feature, the Long Border. A riotous and colourful mix of hardy and tender perennials, shrubs, climbers, biennials and annuals in combination with bulbs, the border is a glorious living tapestry that changes with the seasons. The whole effect is intended to appear, as head gardener Fergus Garrett describes it, “exuberant and uncontrived”.

However, as the Toronto Botanical Garden’s own head gardener, Sandra Pella, will tell you, achieving this natural look requires a lot of thought and a great deal of intensive labour.

She experienced the garden as an intern working at Great Dixter for five weeks last winter, from January to March, when it’s early spring in southern England and the garden is just coming back to life with hellebores, crocus, witch hazel and the garden’s famous display of snowdrops. It wasn’t entirely a comfortable experience. Sandra arrived during one of the coldest, wettest winters in many years – there were even a rare couple of days of snow. She stayed in the impressive-looking but cold and damp manor where she had to wear three layers of clothing in bed to stay warm. But what she learned there and the people she met were worth the discomforts: “The experience was great. I would go back in a heartbeat.”

Great Dixter dates back to the mid-15th century and became the family home of well-known gardener, author and lecturer Christopher Lloyd when his parents bought the property in 1910 and hired famed architect Sir Edwin Lutyens to restore and add to the building and to design the gardens. Lloyd favoured combining many colours in mixed beds and was constantly experimenting, adding exotic species, such as Musa basjoo, a hardy Japanese banana, to the mix. He never married or had children and when he died, in 2006, the Great Dixter Charitable Trust was established to preserve the house and gardens as Lloyd would have wanted.

Fergus Garrett, who had worked with Lloyd for many years, carries on the late master’s vision, imparting his knowledge to new generations of gardeners. Interns like Pella come from all over the world to assist the permanent staff of half a dozen gardeners and a small army of volunteers in maintaining the gardens.

Pella’s day at Great Dixter started at 8 a.m., rain or shine. Gardeners were assigned to a particular section of one of the beds and the first task was to lay down boards to walk on and run wheelbarrows over to avoid compacting the soil as they worked. They would spend the day cutting back and lifting and dividing plants — some of which were destined for sale while others would be dispersed throughout the garden. Or they would prune fruit trees in the orchard as well as the shrubs on the property.

“Great care was taken when dividing perennials. The tool of choice most often was a fork as it did far less damage to the root systems,” says Pella, adding that time was also spent in the nursery potting up divisions and accounting for all the plant material that came in or went out.

Once the work in each section was completed, the last task was to apply a layer of compost over the bed. When amending the soil with mushroom or bark compost, Garrett instructed the gardeners to “tickle the soil” gently using a special long-handled, three-pronged fork that Pella says worked very well: “We didn’t turn over the soil with a spade. We had to keep the soil as undisturbed as possible. It was very labour intensive. Even when we were turning over a whole section, we would dig down only a couple of inches at most.”

Although the gardens are weeded, plants such as the biennial mullein (Verbascum olympicum) are allowed to self-sow and are either left where they grow or moved to other beds.

While specific areas may have had a particular purpose, or theme, there were no rigid rules about which plants should be in each bed, and everything else was not necessarily weeded out, as is often the case here in Canada, says Pella. “If invaders (self-sown annuals, perennials and trees, etc.) come in, they’re allowed to stay or are lifted out and put somewhere else. Verbena bonariensis and evening primrose (Oenothera), for example, are allowed to self-sow freely throughout the gardens.”

Another difference in technique between the Canadian style of gardening and that of Great Dixter was Garrett’s insistence that perennials that had finished blooming be cut back practically flush to the soil and marked with bamboo sticks, a practice Pella initially thought unnecessary but came to agree with because it left the gardens tidier and allowed for an easy inventory of the plants in each bed.

What struck Pella the most was the carefully thought-out succession of plantings so that there was always something to see and the dense planting of the beds so that there was seldom any soil left exposed: “The same area, due to this style of planting, could wear three or four different faces with the changing seasons. That’s what sets English gardens apart — it’s the understanding of what will happen next.” First, in spring, come the hellebores, crocus and snowdrops, then the “massive, gorgeous magnolia” flowers, followed by tulips and bluebells. By the end of March, the dahlias and cannas are put in for a big splash of late summer and fall colour. And then the flowering shrubs and perennials put on a show throughout the summer. And while Canadian gardeners strive for the same continuous seasonal displays, she says that Garrett and his staff have got it down to a “fine science”: “After having seen only the beginnings of the season and what was to come, it was obvious to me that we have a way to go.”

Pella was also struck by the importance of the structure (the layout and use of stone, paving and hedging) of the gardens themselves. For example, yew hedging is used to divide the gardens into separate areas and provide a backdrop to the mixed plantings in the beds. “Whether summer or winter, even if nothing is flowering, it’s a pleasure to walk the gardens and see these ‘good bones’. Here in Canada, we are too caught up in always having something in flower or lots of colour. I learned that good design and structure go a long way and add other elements to the garden, extending its season.

While she was at Dixter, Pella walked the garden daily and always saw something new and interesting even though it was so early in the growing season.

Her most lasting impression is of the cultural importance of gardening in England. In Canada, gardening is more of a seasonal activity, whereas in England it’s a way of life. “The connection between house and garden is not as prevalent here as it is in England,” she observes. “Certainly, Great Dixter is a great example of how the one relies on, and is tied to, the other. The Manor and the Garden are Great Dixter.” 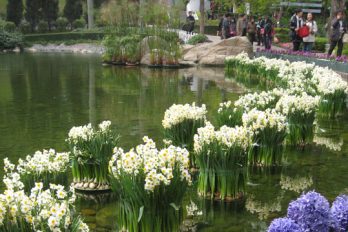 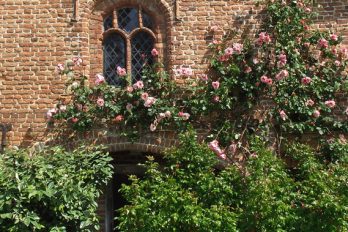 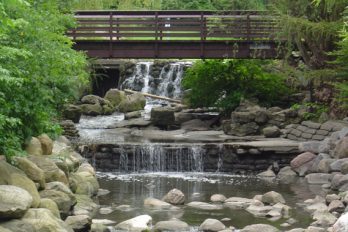