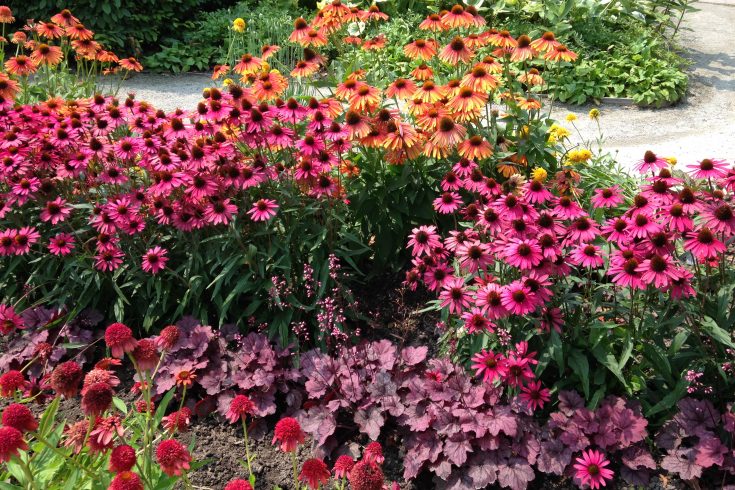 Did you know that there are more than 800 species of wild bees in Canada, including 364 in Toronto, of which 90 per cent are native? Well neither did I but these are just a few of the facts I learned at the Beneficial Biodiversity Symposium hosted by the TBG.

Kim Fellows, of Pollinator Partnership 2 (PP2) and Seeds of Diversity said that we have lost 75 per cent of plant biodiversity in the last 100 years.  To illustrate, she put up a chart showing that there were 93 per cent fewer varieties of vegetables available in 1983 than in 1903. Bees are pollinators and pollination is one of the most important mechanism for maintaining biodiversity. Kim also presented a list of things we can do to promote biodiversity, which include:

From Scott MacIvor, Post Doctoral Researcher in the Department of Biological Sciences at the University of Toronto Scarborough, I learned that more than 300 green roofs have been installed on Toronto buildings over the past five years. “We have gone from having buildings as consumers to buildings as conservators to buildings as contributors to the landscape,” he said. Growing on green roofs can be a significant method for encouraging biodiversity in the city but Scott pointed out that it’s important to investigate which plants will actually thrive up in the air in varying wind and soil conditions, and which native or tropical plants that grow there are of benefit to pollinators. He noted that sedum, which has many varieties, is a good plant for dry conditions such as those on green roofs.

From Scott Torrance of Scott Torrance Landscape Architects I learned about a new walking and cycling path called the West Toronto Railpath which I hope to visit soon. This linear park begins just north of Dupont St. and winds some 2.1 k to Dundas St West. It has been replanted with collected seeds and compatible species, all of which attract butterflies, bees and other pollinators.

Writer Lorraine Johnson said that our society is suffering from an aesthetics challenge and that when most people think of native plants they think “weeds or weedy messes.” And yet, some of the most invasive plants threatening our gardens and parks today, such as dandelions, Queen Anne’s lace, buckthorn, Norway maple, dog-strangling vine and creeping Charlie … are all non native.

We are so conditioned to managed, controlled landscapes from decades of history, pressure and marketing that we find wild gardens threatening, she said. “We need to give up some control and management. We should be focussing on ‘rewilding’ ourselves and our culture.  All that we don’t know about nature and the wild leads to a sense of wonder and humility.”

Keynote speaker plant biologist Dr. Ari Novy, Executive Director, U.S. Botanic Garden, pointed out that about one third of today’s plants are at risk of extinction. Agriculture, he said, is displacing biodiversity. “We can’t get rid of agriculture especially with the expanding world population. But we need to know what we are doing before we go forward. We need to bring agriculture into the city. We need an audacious goal, “he said, “because we will soon have to feed more people on less land.”

Harry Jongerden, TBG Executive Director, said that botanical gardens today play a role in the study of biodiversity and in collecting, conserving, educating and display. “We need to be humble and expert at the same time,” he said. “We are lucky in Toronto because we’ve got the wild growing right through our city in 50 Shades of Green.”