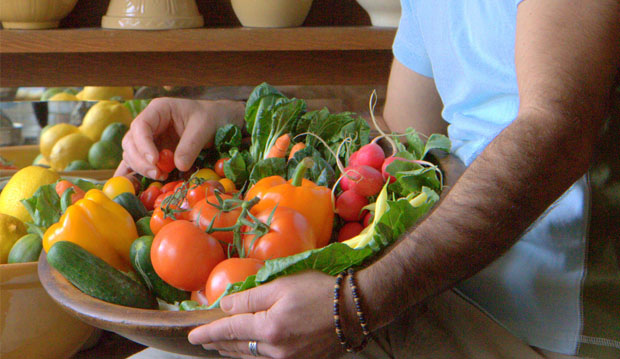 Comments Off on Build it and They Will Grow
Get Gardening

What would Paul Zammit’s veggie garden look like? In an interview with the TBG’s Director of Horticulture, Trellis editor Lorraine Flanigan gets the scoop on how to grow the best crop on the block.

Trellis: After reading Mark Cullen’s tips on building a vegetable plot, we know that vegetables need lots of sun and that the garden should have rich, crumbly soil and be close to a source of water, but what else do we often forget when choosing a site?
Zammit: Wind exposure: drying winds increase plants’ demands for water. And, as you say, full sun is best, but some leafy veggies will grow in part sun. However, the more sun the better – and the yummier too!

Trellis: There’s been lots of talk about not disturbing micro-organisms in the soil. Does this mean we shouldn’t dig or rototill?
Zammit: I did research in university on the impact of tilling and fertilizer on soil microbe populations – it’s a rather scary story. Whenever possible, I’m a fan of no-dig gardening. However, depending on how the area was previously used or the makeup of the existing soil, I often recommend turning over the earth when creating a new bed or expanding an old one. And I prefer the shovel/dig method rather than rototilling. It’s also important to keep soil compaction to a minimum. When working in your beds, lay down boards to avoid stepping on the soil. If treading on the soil is unavoidable, loosen it where you have stepped. To reduce compaction from foot traffic, use mulched maintenance paths.

Trellis: What’s the most important organic amendment you can add to a veggie plot?
Zammit: Don’t get me started. I have been preaching this for years: when gardening in the ground, feed the soil! Feed the worms, bacteria, fungi and everything else that lives there. These are silent workers that break down organic matter, making nutrients available to plants. Add as much composted organic matter to the soil as possible. I’m a big fan of composted manure – especially rabbit manure. It’s fantastic! If manure is not available, apply composted kitchen waste. Shredded leaves applied as a mulch in late fall can be an excellent source of organic matter. The next spring, you can hear the worms “singing” as they work the leaves into the ground. Whether it’s clay or sandy soil, the solution is the same, add organic matter.

Trellis: Is there a trick to knowing what to plant where?
Zammit: Research, experience, learning from others – including parents and grandparents – and good record-keeping go a long way to helping you plan your garden. Also, consider the mature plant size and height: avoid planting tall vegetables where they might shade shorter ones. Don’t forget to make use of vertical space. For vines such a cucumber or beans, plant an early crop underneath their supports that will grow, mature and be harvested before the vines shade them out. For example, grow a crop of quick-maturing radishes under an obelisk of cucumbers. Learn to maximize the use of your space.

Trellis: Would you recommend mixing veggies and herbs in the same plot?
Zammit: I love to mix them up. I’m a big fan of using parsley and sage as edging plants in the veggie garden – and in perennial borders. Rosemary, too. All of these are fragrant when you brush up against them, cold-tolerant so they last well into the fall, relatively pest free and just nice to look at.

Trellis: Can you grow ornamentals with your veggies?
Zammit: Why not? I’m a fan of sowing leaf lettuce or mesclun mix around spring-blooming bulbs such as tulips. This confused people at the garden centre where I once worked. I just loved it! Follow up later with a planting of nasturtiums to cover the maturing foliage of the bulbs. Get the most colour, beauty and yummy treats you can from every square inch of the garden.

Trellis: Does companion planting really work? What are the best combos?
Zammit: There a number of great lists of companion plantings available. One that works for me is planting edible marigolds (Tagetes tenuifolia) around tomatoes. The poor marigolds get devoured by insect pests, sparing the tomatoes – at least for the time being. I also just recently learned from Marjorie Mason that marigolds keep cabbage butterflies away from cabbages. Apparently they become disoriented by the scent. Fun! Garlic has the same effect. It helps keep aphids away from plants such as roses and raspberries – it’s also pretty effective in keeping people away from each other.

Trellis: It’s there an advantage or disadvantage to sowing veggies in rows?
Zammit: Planting in rows offers the best exposure to sunlight and allows for proper spacing of plants. And the spacing between rows can often help reduce the spread of some pests and diseases. Growing in rows also helps to control weeds.

Trellis: How wide should pathways be and how do you prevent them from getting muddy in the rain?
Zammit: I recommend a width of about 30 to 45 centimetres (12 to 18 inches) – enough space to allow you to move between the rows and enough space for bending down and kneeling to harvest. I like using a straw mulch, which slowly breaks down over time and adds organic matter to the soil. This also helps reduce soil compaction. Another option is shredded leaves or cedar. It’s also important to avoid walking on soils that are too wet, as it can easily cause soil compaction.

Lorraine Flanigan is editor of Trellis and a Toronto Master Gardener.

View all posts by Communications Department →

May 28, 2020 by Communications Department

Pioneers cleared the land to grow crops to put food on the table. In more modern times, we enjoy the fruits of a multicultural buffet…. 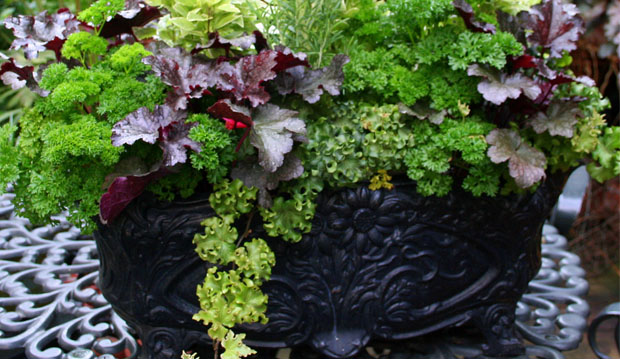 Paul Zammit demonstrates how to pot up savoury herbs for a miniature culinary garden. 1.Select the right container Plants need ample space to develop a… 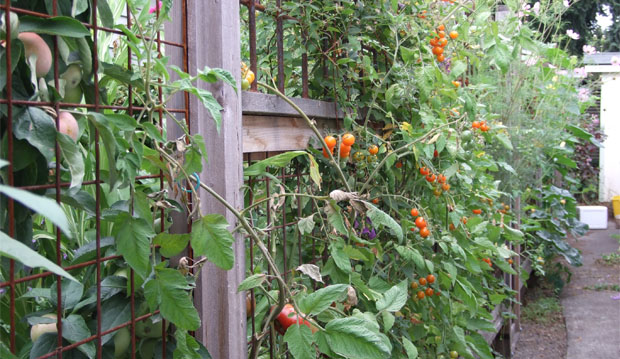 If your garden is a postage stamp, Ken Brown shows you how to grow up and feed your family garden-fresh vegetables. There’s lots of room… 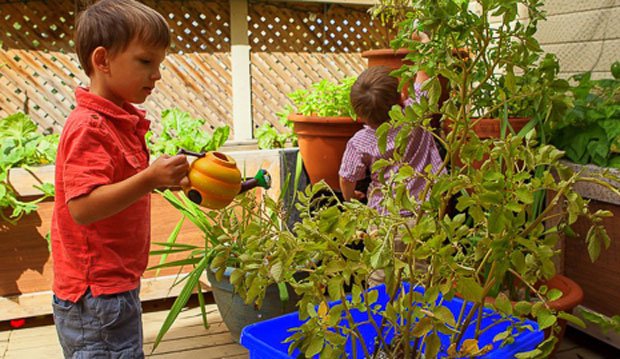 Use a large, deep pot or even a recycling bin, and you and your kids can start a potato patch on your patio, balcony or…