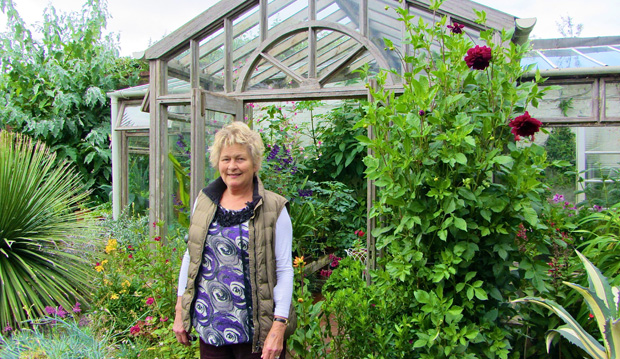 It’s not every day that a world-renowned gardener will offer to make you a chicken sandwich, but Helen Dillon—the Dublin-based author, broadcaster, plantswoman extraordinaire— is that kind of person. I arrived at her garden unannounced, though not quite unexpected (I was to call to let her know what time I’d be coming, but when I hit the motorway my cellphone died, and I discovered that in the Irish republic, the notion of public payphones at service areas is dead as the dodo, too). Nevertheless, Helen graciously welcomed me into the spacious home that she shares with her husband, Val, and their two small dogs, Daisy and Ruby, and told me to make myself comfortable while she bid farewell to some friends who were just on their way out. Entering into Helen and Val’s elegant, light-filled sitting room  (she was once an antiques dealer) I had my first glimpse of her famous garden, and it was a breathtaking sight. “Would you like a cup of tea, or a coffee, or maybe a gin-and-tonic?” asked Helen as she came in to join me. I confessed that I was longing just to get out into her garden, which had been on my “must see” bucket list for quite a few years. So off we went.

Despite it being mid-September, the garden was filled with glorious colour. Some years ago (she’s gardened there for 40), the garden scheme was a bit more controlled, as the border on one side was red, and on the other, blue.

“Now it’s more like a box of Smarties,” she said happily. Well, not quite. This is no madwoman’s breakfast. Her good taste and painterly eye are everywhere in evidence. The day I visited, there was a lot of orange, pink and red to be seen (dahlias, cardinal flower, Knautia macedonica, ornamental oregano (Origanum laevigatum) and a red Chinese rose were just a few of the warm-hued plants I spotted), punctuated by purples and blues (plumbago, leadwort and Agapanthus, among others) and white. However, Helen cautioned me that this is an unusual year in that the Irish summer has been very cool and wet. Plants that would normally be spent by now—such as the phlox—are still in bloom. In a normal year, the best time to visit her garden would be at least six weeks earlier.

“And in October, this will all be finished,” she added.

One of her favourite gardening tricks is the liberal use of movable containers of plants to fill in bare spots and add (or change) colour. She has several tall containers of airy, tall Verbena bonariensis, for example, which provide a welcome pop of purple without obscuring the view through them. Right now, the pots doing most of the visual heavy lifting including selections of dahlias, Alstromeria, Agapanthus and a few lilies. As for the containers, they range from handsome dark terra cotta to galvanized metal garbage cans to those big black plastic pots you get at the nursery. Surrounded by handsome stone paving, the long pool or canal that runs through the garden provides a visually calming anchor for the exuberance of the beds. This is a large garden, and it is filled with many interesting corners, plant treasures and beautiful accents. Here are a few examples: Papyrus, possibly ‘King Tut’, growing at the base of the canal near to the house. An inviting back corner. A section of the dry garden. The working potting shed. Nearby, a pretty greenhouse had a good selection of geraniums and Nicotiana mutabilis—a tobacco plant that changes colours from white, to palest pink, to rose. An old statue, one of several, is surrounded by ivy and grasses. A dry sink. Helen has a collection of succulents as well.

Some of the plants that caught my eye included: The crinkly white petals of Coulter’s Matilija poppy (Romneya coulterii), held by the pale wrinkly hand of yours truly. The fruits of this compact grey-leafed hawthorn (Crataegus orientalis) are just beginning to turn red. Helen loves this tall thicket of devil’s walking stick (Aralia spinosa), and with a glint in her eye tells me that she also has several specimens of Ailanthus altissima (tree of heaven). “The purists gasp at this, but it doesn’t seed itself over here,” she explains. A large, well-shaped specimen of variegated Cornelian cherry (Cornus mas variegata) is one of the few variegated plants to be seen in the garden. A close-up of the peeling, cinammon-coloured bark of a paperbark maple (Acer griseum). A thriving clump of our own native Joe-Pye weed (Eupatorium purpureum). This stunning, bi-coloured field dianthus blew me away so much that my hand shook while I took the photo. Sorry. (Actually, it was the wind that blew me away, and I should have taken a safety shot.) Lilium henryi, with its recurved orange petals, is named after the late great Irish plant hunter Augustine Henry whose house was next door. I ask Helen about the dreaded lily-leaf beetle that’s such a pest over here, but it’s not yet a problem there (talk about the luck of the Irish). However, in one older part of the garden, she is battling something very nasty called honey fungus (Armilleria), which travels underground and attacks and kills the roots of many woody and perennial plants.
You can find out more about it here Honey fungus / Royal Horticultural Society apps.rhs.org.uk › Gardening › Advice

There are a number of other plants that I admired, such as a buddleja with large, soft, felty, silver grey leaves (Buddleja agathosema) and a Senecio petasites.

Our talk turned to…surprise!…the act of gardening itself. Helen remarked that my hands look as though they have seen some work. As we compared our age spots (I won!), Helen told me that these days, their talented niece, Julie Dillon, who also has her own line of beautiful sweaters for children, does much of the gardening. I bought this cardigan for my two-year-old granddaughter: Helen then said that she was going to make us a chicken sandwich (“it’s a nice organic chicken and do you want butter or margarine?”) and left me to poke around on my own. Later, as we sat companionably in the kitchen, chatting and drinking tea, I reached for the last delicious half of sandwich.

“What about Val?” I ask, my hand poised.

Just as I took a bite, Val came in and said, “Helen, it’s nearly two o’clock—shouldn’t we have some lunch?”

I sure hope there was enough chicken left for him.

Helen Dillon is starting to write a new book this fall (hooray). While it’s early days yet, she expects it’ll be a mixture of ideas, advice and lots of opinions on plants. The publisher is Timber Press, and we can look forward to seeing it in a couple of years.

To find out more about Helen’s books and her garden, which is open to the public daily between 2 and 6 p.m. in March, July and August, and on Sundays only in April, May, June and September, visit www.dillongarden.com. Admission is five Euros.