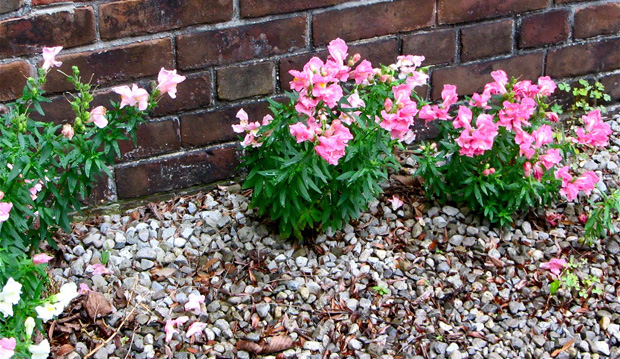 Wow, what an “all at once” summer it’s been in the garden. The snapdragons you see above seed themselves in the gravel of my driveway, along with cosmos, opium poppies, various herbs, feverfew, mallow, morning glories, Shasta daisies, columbine and many others. Only this year, the snapdragons didn’t need to seed themselves because last year’s plants never died off during our mild winter, and have been blooming like mad for many weeks (a large clump of rosemary also survived).

In fact, have you noticed how many plants that traditionally bloom later in summer are at it right now? Yarrow, oakleaf hydrangea, phlox—I could go on. Hmm. With everything blooming all at once right now, it makes me wonder what we’ll be looking at in August and September? It’s been an “all at once” summer in terms of social activities as well, with your faithful reporter happily turning up at all manner of pleasant events.  Last week, we held one of our HortiCULTURE Salons in the Weston Family Library with Lorraine Johnson. A salon (no, it’s nothing to do with your hair) is a tradition that dates back for centuries. Sometimes it’s a gathering whereby a celebrity, such as a literary person, talks about or reads from his or her work, and conversation or debate ensue. Lorraine is a naturalist, author and editor, and talked about her experiences with growing food (and chickens) in the city, illustrating points by reading a few passages from her terrific recent book, City Farmer, to get the ball rolling. Some folks chimed in, others simply listened in (no pressure!), and a lively, fun-filled discussion followed. As an extra bonus, we watched as a cheeky young groundhog went about his business—he’s lucky the bees didn’t bite him on the nose. For more on the HortiCULTURE Salon Series, go here. And now for a small horticultural interlude: In bloom right now in our Garden Entry Walk is this beautiful Stachys ‘Hummelo’—a kind of lambs ear that was selected and bred in the Netherlands by world-renowned plantsman Piet Oudolf, and named after his home. Moving right along, the members of the Milne House Garden Club kindly invited me to their summer luncheon at the Donalda Club, where I was to present the TBG prize in photography. Unfortunately, I arrived a bit late because MapQuest sent me on a wild goose chase to a street that doesn’t exist, so I circled like a vulture for a good 20 minutes until I figured out another way in. The winner of that photography prize was Pat Ware, who just happened to be sitting next to me at lunch! Did someone say “boarding house reach?” Then a few days later, I was off to the White Party,  a private event kindly hosted by Terry McGlade and Zeljka Alosinac at their beautiful penthouse home to raise funds for the TBG’s children’s programs. The idea was to come dressed in white to celebrate the Summer Solstice. (All-white is always a challenge for me, as it tends to be a giant magnet for spills and disasters of many kinds.) They even whipped up some tasty ice cream with dry ice and a drill! There was also a margarita bar and a DJ. Host Terry McGlade and Director of Development Claudia Zuccato Ria chat on one of the two expansive terraces. Plans to dance outside were rained out, though we did have some dry breaks where we could admire the plantings and the view. …such as this stunning silhouette of Casa Loma in a spectacular, raspberry coloured sunset. Here I am, and looking for all the world like High Priestess Petunia Poot-poot about to make a sacrificial offering. On my left is our hostess,  Zeljka Alosinac, along with other party guests. Thanks, Terry and Zeljka, for a memorable evening. There was no rest for the wicked at the weekend, either. Last Saturday evening, contemporary dance company mm2 from Philadelphia performed outdoors in our Arrival Courtyard for a crowd of dance lovers. This young company comprises dancers who not only perform but also choreograph the works, and all but one has finished their studies in dance at university. (The lone male is under 18 and isn’t old enough to go to college.) The ten pieces, part of “Conversations,” ranged from the dramatic to the droll. Here, company director Steven Weisz is joined by Director of Development Claudia Zuccato Ria, left, and Globe and Mail columnist, dance critic and author Deirdre Kelly, whose new book, Ballerina, will be published this fall. After the performance, Deirdre led and insightful and spirited Q and A with Steven and the dancers, and there were plenty of questions from the audience, too.

“I can’t thank you enough for all your kindness and hard work in making this event possible. It was a perfect evening at TBG and one that our dancers will remember for a lifetime.” – Steven Weisz
For more photos click here. On Sunday, my friend Sonia Day hosted a Ladyslipper Luncheon on her “middle-aged spread” in the country (if you haven’t read it, her book of the same name is hilarious) for a few of her co-Horts. The day was a bit mizzly and the ladyslipper orchids long gone, but we didn’t care and, glasses and platters in hand, trooped down to an idyllic spot by her pond, which is densely sheltered by trees. Most gardeners I know are also good cooks, so a feast of yummy food and wine quickly filled the table and a good time was had by all. Sonia’s garden is a photographer’s paradise, but I’ll just leave you with this image of bachelor’s buttons. Aren’t the colours pretty? Sonia says they came from a packet of Renee’s Garden seeds (a brand we carry in our Shop), and come back each year. I’m pretty sure they’re hardy, self-seeding annuals—hmm, more goodies for my gravel driveway?

Coming Up: Terrific Thursdays at the TBG! Every Thursday from 3 to 7, you can buy farm fresh produce and more at our Organic Farmers’ market. And starting on Thursday, July 5, you can also enjoy an inexpensive light supper in our newly spiffed up Garden Café, a tour of our gardens, and the first of eight consecutive Edwards Summer Music Series: Gardens of Song performances in the Westview Terrace (in case of inclement weather, concerts will be held in the Floral Hall). For the second season in a row, this series is being generously sponsored by the Edwards Charitable Foundation, and is more fun than a barrel of monkeys. Check out the lineup here. The cost? It’s free for TBG members (just show your card) and children 12 and under, and a toonie for everyone else. See you there, sweet pea.